You want the beautiful image resolution the new televisions deliver when viewing your favorite movies on your preferred streaming services. The new 2021 OLED, QLED, 4K UHD, and 8K models produce more than four times the resolution of your old HDTV.

You’ve narrow down the screen size you want and decided whether you will go with a flat or curved TV screen.

This is where most people get confused. Oftentimes, many people will search for OLED vs. 4K.

Did you know there are OLED TVs that are also 4K?  Also, there are 4K televisions that are not OLED.

I’ll show you what to actually compare and how to determine which TV technology is best for your budget.

To clear everything up, let’s quickly examine OLED and 4K.

Instead of comparing OLED vs. 4K, the real comparison is OLED vs. 4K LED TVs. Image Source

The largest number of TVs sold today are based on LCD screen technology. We often refer to them as LED LCD TVs, or just LED TVs, because these sets use an LED backlight.

OLED is a newer, competing TV technology that is gaining in popularity.

So what is the difference between 4K Ultra HD and OLED TVs?

This article will explain the differences between these two TV types and talk about why you might choose one or the other.

We will help you make sense out of each television technology and then show you the difference.

We will also show you which offers more satisfying home entertainment viewing experiences based upon your budget.

Get more out of your content without missing tiny details with Samsung Premium UHD TV. HDR Elite offers a wide range of brightness levels that let you see clearly even in the darkest and the brightest scenes. Image Source

LED stands for light-emitting diode and is the oldest and least expensive HDTV technology.

LED-based LCD TVs use “light-emitting diodes” behind the liquid crystals. LEDs are little solid-state devices that make light due to the movement of electrons through a semiconductor.

They’re ranged in clusters behind the panel (called ‘back-lit’ LCD LED TVs) or on the sides (called ‘edge’ or ‘edge-lit’ LED TVs).

LED TVs are less expensive than OLED technology. They provide the greatest selection in size and brand.

They’re a great value and you can buy an LED TV in virtually any size you want.

There are a few drawbacks. Since LED TVs get their light from an external source this increases the size of the HDTV.

LED televisions can’t produce a true black. In blackout scenes, you’ll notice uneven brightness and a lack of shadow detail in dark areas of the screen.

4K (UHD or Ultra High Definition) refers to the number of horizontal display pixels on the screen (4096 by 2160 pixels). The new 4K Ultra HDTVs have 4 times the resolution of the 1080p display. You’re in the range of 8 million pixels for any size screen.

Adding 4K technology, the level of picture quality is startlingly better than on the televisions you’ve watched in the past. There is less fear of pixelation as you approach the television since the pixels are a lot smaller and grouped tighter.

No matter how close you get or how big the screen is, you’re basically unable to see the individual pixels on the screen. That’s why the picture quality on a 4K TV is simply stunning

When electricity is applied through them they emit light that glows either red, green, or blue.

Most OLED televisions are only a couple of millimeters thick. OLED TVs are incredibly thin because each pixel is its own source of light.

These televisions are thinner than LED TVs because no back-lighting is required.

You can control images at the pixel level in an OLED display.  Each pixel self-illuminates, so OLED TVs deliver unprecedented contrast ratios, and exceptional brightness compared to older LED back-lit TVs.

OLED TVs are much more energy-efficient than other TV panel types.  In an OLED panel, organic films are placed between semiconductors, then supplied with an electrical current.

Each and every pixel can be switched on and off individually. This makes total black possible, and simultaneously uses less power to create peak brightness levels.

Watching an OLED TV, for the first time, is a pure ‘Wow’ moment.

The downsides?  OLED TVs are very expensive, and no one is quite sure how long OLED panels will last.

OLED TVs are only available in large sizes: 55 inches and bigger. LG is the only company that currently manufactures OLED panels for TVs.

Sony has an agreement with LG to put LG OLED panels into certain Sony televisions. Otherwise, you won’t find OLED in any other televisions sold in the U.S.A.

What is the difference between OLED and LED?

The lighting source is the major difference. Each pixel of the carbon-based “organic light-emitting diode” of the OLED is its own light source. In contrast, all of the pixels in an LCD TV are illuminated by “light-emitting diodes” (LED) back or edge lights.

Now let’s compare the two technologies, head-to-head against one another. Since OLED is a premium TV technology, we have compared it to premium LED TVs.

Let’s see how they stack up, one on one, when it comes to important features such as black levels, brightness, contrast, viewing angle, and other key performance considerations. 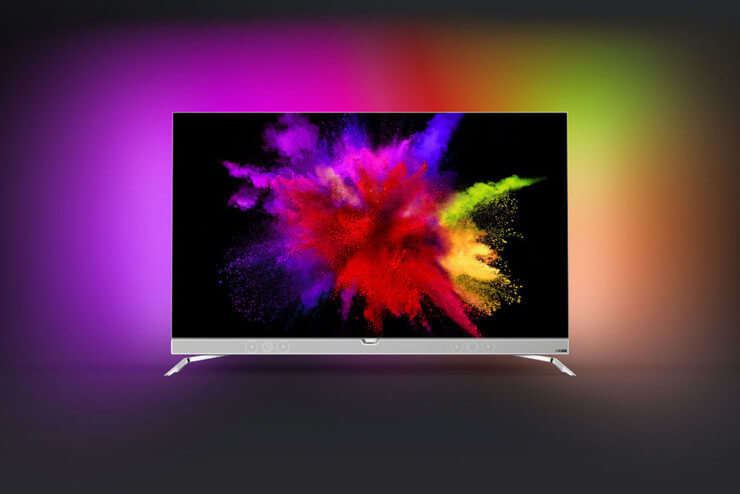 Each OLED pixel contains red, green, and blue elements, which work together to create millions of color combinations.

LED TV tech has improved significantly over the last few years. However, since the Liquid Crystal Display requires LED backlights, they still lack the depth and richness of OLED TV colors.

Since each OLED pixel contains all the elements needed to produce every color in the spectrum, true colors are more accurately reproduced by OLED technology than LEDs.

2. Brightness
When it comes to screen brightness, LED TVs have a considerable advantage.

LED backlighting can produce brilliant whites and almost unlimited levels of brightness. There is no backlight, and the size of each organic light emitting diode pixel  (OLED) somewhat limits brightness.

A TV screen’s ability to display deeper black levels is arguably the most important element in producing an excellent picture image.

The individually lit OLED pixel offers unlimited grayscale and deeper blacks. Blacks are near perfect in the new OLED TVs.

While there have been incredible improvements in LED TV black levels, they will never match OLED TVs in this area.

LED backlights shine behind an LCD panel in LED LCD TVs. 4K LED TVs have to rely on advanced dimming technology, which selectively dims LEDs that don’t need to be on at full blast.

As a result, LED TVs can suffer from an effect called “light bleed”, where lighter sections of the screen create a glow in adjacent darker areas.

This is not a problem for OLED TVs.  An OLED pixel doesn’t produce any light when it does not get electricity. Therefore, it produces the deepest blacks because it is totally black. 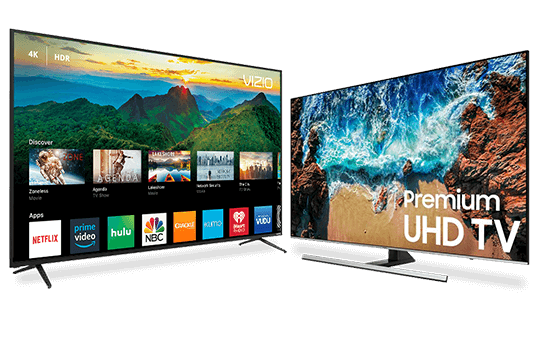 Incredible clarity and sharpness is a major strength of new 4K TVs.  The millions of screen display pixels produce great depth and detail.

Screen uniformity applies to how consistent the image is distributed across the screen. A uniform screen displays an image quality that remains consistent in terms of brightness, color, and clarity at all points along the display area.

Screen uniformity is a drawback specifically related to LED TVs.  It is due to having backlights rather than individually lit pixels.

Turning the backlight setting down usually alleviates the problem.

By contrast, since each pixel cell is lit individually, OLED TVs have an extremely even spread of light across the picture.  Screen uniformity really enhances the beauty of the entire image.

As a result of even lighting from each individually lit pixel, OLED TVs display excellent side angle viewing.

While 4K LED TVs are getting better, increasing the viewing angle, they still lag behind OLED models.

It is due to the LED backlights being farther away from the front of the screen panel.

This ultra-thin wallpaper TV offers a revolutionary design that has no rival.  Paper-thin and incredibly lightweight, the OLED wallpaper TV from LG features self-lighting image pixels, making blacks more black while allowing the color to pop off the screen. LG wallpaper TVs create a 360-degree immersive viewing experience, delivering crystal clear images from any viewing angle. View your favorite movies, TV shows,  and sporting events, with picture clarity and brilliant color unlike anything you have ever seen.

Response time is the time it takes for each individual diode to change from “on” to “off”.  Faster response time creates less motion blur.

The individual OLED pixels are lightning-fast.  The LED TV diodes are much slower and operate in a cluster of pixels, not individually.  These factors result in a slower change between “on” and “off” states. 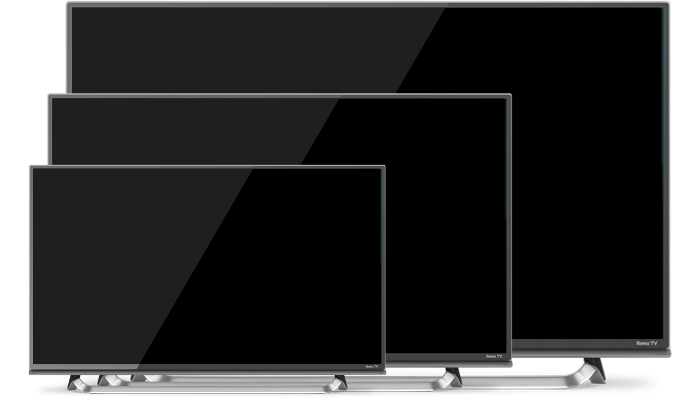 OLEDs have made significant strides in this area. However, the size range is still limited compared to LED TVs.

Screen sizes for OLED models usually begin at 55 inches.  Even though OLED displays are now pushing 90+ inches, they are still dwarfed by the largest 4K LED screen sizes.

100+ inch LED displays are now being offered to the public.

9. Lifespan
LCD front panels have been around for many years.  4K LED TVs use time-tested LED backlights. This technology should produce 60,000 viewing hours.  That equals 41 years of TV viewing based on 4 hour a day usage.

Over time, LED bulbs will fade, and screen uniformity will degrade.  Economically replacing LED backlights is not currently possible.

OLED technology is new and untested.  True longevity is unknown.

LG says its OLED TVs can be watched 5 hours a day for 54 years before they fall to 50-percent brightness.  That claim remains to be seen, as OLED TVs have only been out since 2013.

We give the OLED vs. LED lifespan nod to 4K LED panels because of this uncertainty.

12. Price
4K TVs are available for a dynamic range of prices.  Even “high end” 4K LED TVs are priced considerably less than OLED televisions.  OLED TVs are still being sold at premium prices.

13) Overall Value
If premium OLED and 4K LED TVs were offered at the same price, the better picture quality of the OLED panel is an easy choice.

When you consider the significant savings you can enjoy, it’s hard to pass up a top-quality 4K LED TV.

Should I buy an OLED or 4K LED TV?

The decision to purchase an OLED vs. 4K LED TV can be a tough one. What you decide to buy largely comes down to the budget.

Is OLED worth it?  If money is no object, no question about it, go for an OLED.

If the price is more of a consideration, go with a mid-range or premium full-array back-lit 4K LED TV.

They might not have quite the same level of contrast and pure black levels, but they can come very close. Your wallet will thank you.

So what did you decide to buy?  Share with us in the comments below?

LG continued to lead the way with the premier picture quality of OLED TVs in 2019. Most UHD TV manufacturers, Samsung being the front-runner, are doubling down on improving 4K LED back-lit QLED (Quantum Dot) TV technology and adding features.

Added to wishlistRemoved from wishlist 13